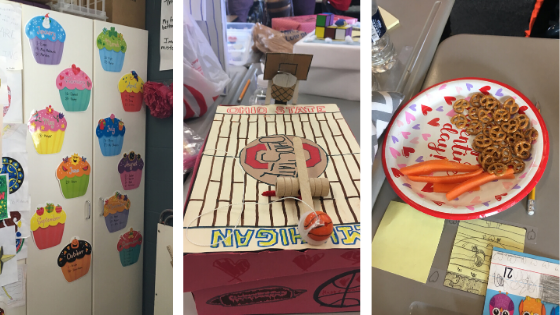 Last week Lia and I hit a milestone – we went to the last school party we will ever attend for our children.  Annie’s Valentine’s Day party was the end of the line.  Never again will we mill around awkwardly with other parents, making small-talk and looking for something useful to do. When we left, we could tell that it was time to be finished with parties, because Annie (our most clingy child) did not really need or want us there.

What struck me the most about the party, and how much parties have changed over the years, was the absence of sweets!  No smarties, sweet tarts or cupcakes to be found.  Instead of overloading our kids with useless carbs and glucose, sending them sky-high only to crash and burn an hour later, they were offered . . .

Carrots!  At a Valentine’s Day party?! Does every party hereby require healthy vegetables in favor of processed sugar?  What exactly is going on?

As it happens, there is little that Betty herself, who is adventurous by the standards of her day, will not eat; the going slogan she learned as a child is about cleaning your plate, and not doing so is still considered bad form. Aside from that notion though, which is a holdover to scarcer times, Betty is much like any other American home cook in 1958. She likes making some things and not others, even as she prefers eating some things to others — and there, in personal aesthetics, does the matter end for her. It’s not that Betty lacks opinions about food. It’s just that the ones she has are limited to what she does and does not personally like to make and eat.

Now imagine one possible counterpart to Betty today, her 30-year-old granddaughter Jennifer. Jennifer has almost no cans or jars in her cupboard. She has no children or husband or live-in boyfriend either, which is why her kitchen table on most nights features a laptop and goes unset. Yet interestingly enough, despite the lack of ceremony at the table, Jennifer pays far more attention to food, and feels far more strongly in her convictions about it, than anyone she knows from Betty’s time.

Wavering in and out of vegetarianism, Jennifer is adamantly opposed to eating red meat or endangered fish. She is also opposed to industrialized breeding, genetically enhanced fruits and vegetables, and to pesticides and other artificial agents. She tries to minimize her dairy intake, and cooks tofu as much as possible. She also buys “organic” in the belief that it is better both for her and for the animals raised in that way, even though the products are markedly more expensive than those from the local grocery store. Her diet is heavy in all the ways that Betty’s was light: with fresh vegetables and fruits in particular. Jennifer has nothing but ice in her freezer, soymilk and various other items her grandmother wouldn’t have recognized in the refrigerator, and on the counter stands a vegetable juicer she feels she “ought” to use more.

Most important of all, however, is the difference in moral attitude separating Betty and Jennifer on the matter of food. Jennifer feels that there is a right and wrong about these options that transcends her exercise of choice as a consumer. She does not exactly condemn those who believe otherwise, but she doesn’t understand why they do, either. And she certainly thinks the world would be a better place if more people evaluated their food choices as she does. She even proselytizes on occasion when she can.

Betty, on the other hand, would be baffled by the idea of dragooning such moral abstractions into the service of food. Betty thinks food is a matter of taste, whereas sex is governed by universal moral law; and Jennifer thinks exactly the reverse.

Eberstadt argues that food has replaced sex as the appetite we now regulate with ascetic ferocity.  We used to have a Judeo-Christian compass with respect to sex; today, sex is laissez-fare. We used to think of food as a personal preference; today food is an ethical endeavor. This bizarre turn of events shows us that without the proper restrictions and aims a Biblical worldview provides, we always end up with a religion of our own making.

Back to the cupcakes (or sadly, the lack thereof). Maybe there is a concern for food allergies. But maybe that isn’t the only concern. My suspicion is that part of the motivating factor behind carrots over cupcakes is moral in nature.  Carrots are good; cupcakes are bad. To which I say, “BS!” Give the kids cupcakes. Christian freedom means that we can enjoy the fruits of creation as long as we aren’t enslaved by them.  Sure, pack carrots in their lunch (cafeteria trash cans need to feel useful too). But for parties, break out the cupcakes, the chocolates, the sweet tarts, the smarties.

Or at the very least, make them available for the parents.