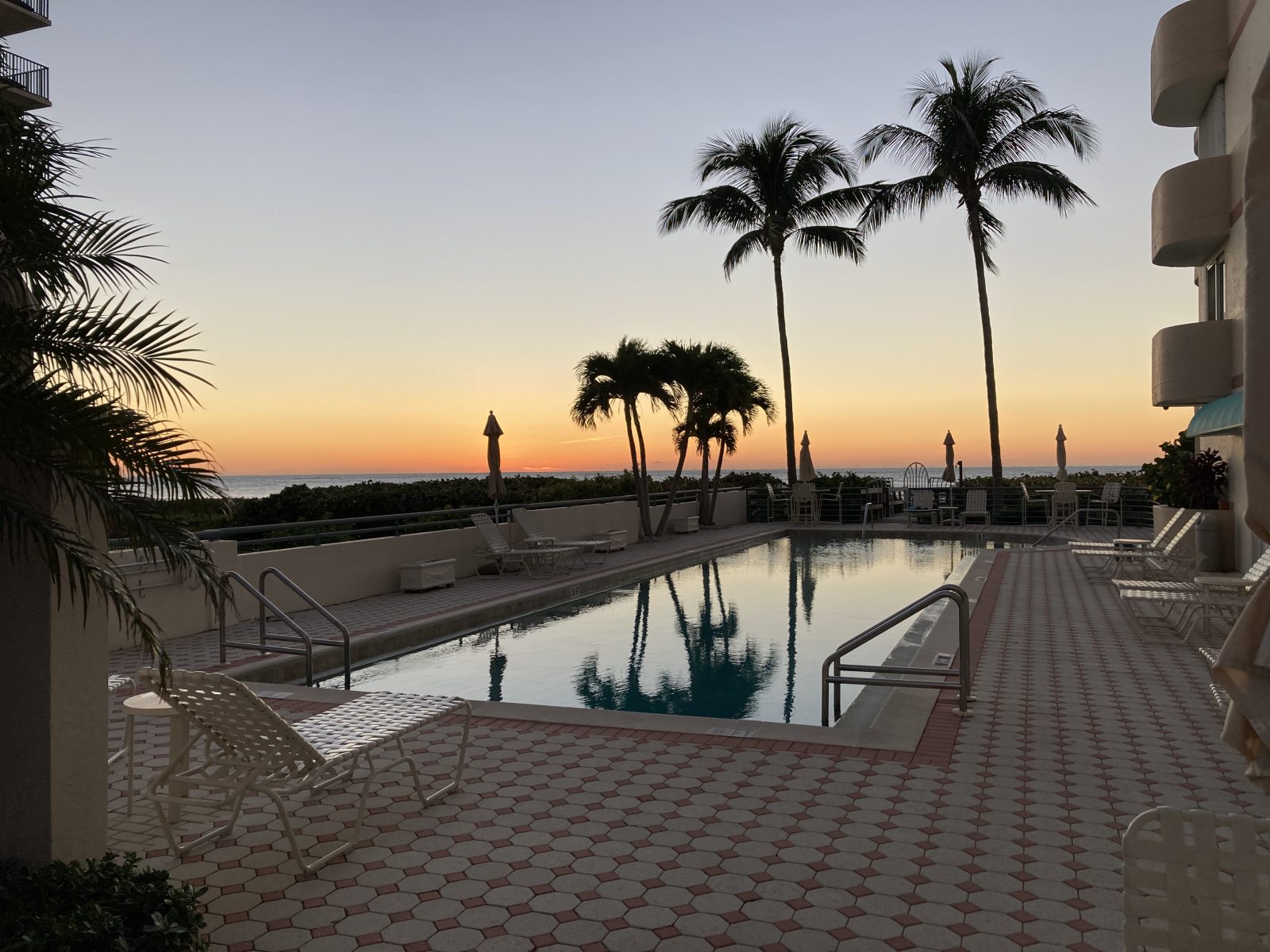 On Thanksgiving Day, my family had the privilege of flying to south Florida for nine days on the beach at my aunt’s condo. What a gift! We played board games, watched the sun rise and set daily, ate a lot of food, had daily devotions together, swam in the pool and the Gulf, and laughed a lot. I did not know how many Klondike Bars a family of 6 could consume in a week or so, but it is an alarmingly large number.

While in Florida I read a dense but very helpful book called Cynical Theories by two non-Christian academics, Helen Pluckrose and James Lindsay. Their book describes the “Social Justice Movement” (SJM). The SJM is not to be confused with specific, concrete attempts to improve laws or policies or the conditions of families in an impoverished urban neighborhood. It is much, much more comprehensive:

When [SJM advocates] speak of “racism,” for example, they are not referring to prejudices on the grounds of race, but rather to a system that permeates all interactions in society, yet is largely invisible except to those who experience it or who have been trained in the proper “critical” methods that train them to see it (These are the people sometimes referred to as being “woke,” meaning awakened, to it).

This worldview is the prevailing orthodoxy in our universities, and its influence continues to ascend in everyday American life. Here are some examples of SJM-related ideas:

It is very important to note that with any of these ideas, the SJM solution to the problem is to strive to overturn the systems that perpetuate these evils. The solution is not merely to focus on particular, local, specific instances of prejudice or injustice and to seek correct them; no, the entire system must be overturned. In this sense, the SJM is a fundamentally revolutionary worldview.

Perhaps you have encountered these ideas and they have bewildered or frustrated you. Or, you may feel a measure of sympathy towards them. Either way, it is helpful to understand them, and Pluckrose and Lindsay’s book helps. They draw a clear line of connection between the Social Justice Movement and the philosophy broadly known as “postmodernism.” Postmodernism is notoriously difficult to pin down because the fathers of postmodernism (all white male European guys, ironically) were primarily interested in deconstructing (tearing down) other worldviews rather than building a comprehensive system themselves. But no system of thought, no matter how much it deconstructs, can exist without some semblance of thematic unity. And five of postmodernism’s consistent themes are:

This is heady, theoretical stuff, but it shows up in everyday life. Here are a few examples:

Pluckrose and Lindsay argue that the SJM is a new religion. It provides a metanarrative for its devotees (a metanarrative is “an overarching account of the world that provides a structure for people’s beliefs and gives meaning to their experiences.” Christianity, for example, is a metanarrative. So is Marxism. So is materialistic atheism). The SJM’s metanarrative is perhaps clear by this point, but perhaps not, so I will state it: American society is systemically, terribly unjust. It is racist, sexist, homophobic, transphobic, and unfair. It matters not whether we can find individuals who hold these prejudices, because all of these are built into the system. And we who are oppressors must confess our mostly unknown and unconscious sins of racism, sexism, etc., and help overturn the system. If we do not, we are simply perpetuating the same sins over and over blindly or out of willful malice (unfortunately, even if we do confess, it is unclear whether we will be made right before the god of the SJM).

Can anything good come out of the Social Justice Movement? I believe so. There are helpful insights to be gained. To be sure, healthy skepticism is useful. The Bible calls it discernment. We should not trust everyone who tells us they are here to help, or that they are telling the truth. Christians are sometimes gullible out of a hope that people are good-natured. We lionize leaders to a degree that is unhealthy. Any look at the history of famous pastors who were fleecing their flocks or who used fame and power to cheat and bully (Carl Lentz is the latest) should convince us of this.

Language is very powerful. We should be aware of this. One example – the killing of millions of babies through the abortion industry is euphemistically called “women’s reproductive justice.” What a title! Who wants to be on the side of “women’s reproductive injustice?” This is language that should be disputed tooth and nail. Another example that Carl Trueman points out is that any disagreement or dispute with homosexual or trans ideology now renders one “phobic.” He writes, “The use of the term phobia effectively places [the one who disagrees] in the realm of the irrational and points toward an underlying bigotry on the part of those who hold such views.” This too is a term we should dispute, because it is untrue. We do not fear or hate anyone unless we do so in direct disobedience to our Lord. No, we love people, and part of that love is expressed in articulating as sinful what the Bible calls sinful, because we hope for all to repent and embrace the One who died to save us from our sins.

Is it helpful to understand how groups of people (women, men, wealthy, poor, black, brown, white, immigrants, etc.) experience life in America? Absolutely. We ought to seek to understand. I have no doubt that my experience as a white guy born in the suburbs with two parents who loved me and had the means to send me to college gives me tremendous advantages over many people in America. I have no doubt that my kids are in a situation that is far more advantageous than kids we have gotten to know at Linden-McKinley high school. Goodness, the problems and struggles some of them face are tremendous. That is part of the reason why we are serving in Linden. But the fact that there is inequity (which has always existed and always will until Jesus returns) does not mean that there is no chance to succeed. American society strives to provide the conditions for equality of opportunity, not equity. To tell someone fighting an uphill battle that they are oppressed and incapable of improving their lives due to forces outside of themselves (oppression and injustice) is not empowering, it is defeating.

Defining race and sex as unbridgeable chasms in identity, as the SJM does, is neither helpful nor effective in assuaging resentment between groups of people. We are universally human. We are also distinctly individual. Identity is not found fundamentally in being part of this or that tribe. It is found in our common humanity as image-bearers of God. As Martin Luther King Jr. preached, we should not be judged “by the color of our skin but by the content of our character.” The SJM, with its relentless focus on group identity, gets this exactly backwards.

Do power and oppression motivate people to do wicked things? Surely. American Christians who wanted to justify slavery developed a terrible racial theology which placed black people in a sub-human category. Why? Well, if all people regardless of skin color are created in God’s image, how could one practice slavery in good conscience? This and other examples ought to at least open us up to the possibility of oppression and the abuse of power in our day. The quest for societal justice is good and right provided it is Biblically consistent, concrete, and specific (and even then, it will be contentious). But the Social Justice Movement defined as the righteous pursuit of tearing down the system to end all inequity is a dangerous utopian religion that blinds people to the strengths of our current system. This does not mean that our system is perfect or ever will be. Christians should be concerned about the trajectory of our culture in a number of ways. But the rule of law and respect for individual rights, houses with central heating, grocery stores with food, and hospitals that take you in and treat you are by no means given. As Pluckrose and Lindsay state, “Equal access to rubble is not a worthy goal.”

It is really hard to argue with true SJM believers. They see through the arguments, every one of them, that defy their worldview. Robin DiAngelo’s White Fragility (which alarmingly is a NYT bestseller) is a great example of this. DiAngelo, a white woman who is very likely rich (one might call this “privileged”), tells us that if we are white, we are privileged racists. It matters not that we do not have prejudicial views or that we have never oppressed someone who is black or brown. Because we benefit from a systemically racist society, we are racist. Further, if we find her arguments unpersuasive, that is only further evidence that we are racist as well as “fragile” (too fragile to own up to reality). How does one argue with a position such as DiAngelo’s, or test it, or debate it? The answer, very simply, is you don’t. You can’t.

To see through everything – marriage, family, capitalism, free speech, science, reason, religion – is to see nothing, CS Lewis reminds us:

“You cannot go on ‘seeing through’ things for ever. The whole point of seeing through something is to see something  through it. It is good that the window should be transparent, because the street or garden beyond it is opaque. How if you saw through the garden too? It is no use trying to ‘see through’ first principles. If you see through everything, then everything is transparent. But a wholly transparent world is an invisible world. To ‘see through’ all things is the same as not to see.”

It is not exactly accurate to say that the SJM sees through everything and therefore sees nothing. This movement’s blindness is rather that it reduces everything to injustice and oppression. It is a view which sees racism, sexism, and oppression everywhere. But this too is a form of blindness. It is a radical skepticism that somehow results in dogmatic assurance, despite the paucity of evidence supporting its claims.

Christians, we have a different view that is far more solid and far more humble. We understand that we share a common humanity as image-bearers of the Almighty God no matter what sex or race we are. We share a common problem of sinfulness, which plagues all of us and cannot be overcome by striving on our own or by seeing systemic injustices in American society. We as distinct individuals are commanded to repent, not only of racism or sexism, but of greed and pride and lust and many other sins. We are promised forgiveness and adoption as sons and daughters as we trust in the Crucified One, who alone can save. And we are commanded to shine the light of Jesus in the world as his humble servants, knowing that the society in which we live will never be a utopian paradise, but also knowing that we are called to impact and improve our society in concrete, tangible ways. This may take the form of helping people individually, and it may take the form of changing laws or conditions that are unfair. Either way, we do these things remembering that we were hopeless and helpless, and Jesus came near to save.